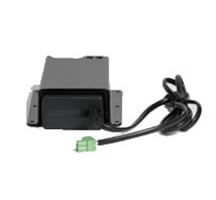 DC input (power module)
DC Input Voltage: 11 to 32 VDC
Power In Standby: 18 Watts
Power During Call: 22 Watts
Power During Data: 31 Watts
Physical
Length 14.0 cm
Width 5.9 cm
Height 3.5 cm
Weight < 0.5 lb
How does the Pilot make a call? …… Easy as 1-2-3
1. An Iridium Pilot voice or data call is received by the closest satellite to the device’s current location, anywhere on the Globe.
2. The traffic is routed through the meshed satellite network and lands at the Alaska Ground Station, and, is then routed over terrestrial networks to the Gateway in Arizona, USA.
3. At the gateway, traffic is converted back to internet protocol (IP) and voice, depending on call type and delivered to the IP cloud or the public switched telephone network (PSTN).

Iridium Global Satellite Network – The Basics
The Iridium satellite network is comprised of 66 low-earth orbiting (LEO), cross-linked satellites, providing voice and data coverage over Earth’s entire surface. The satellites operate as a fully meshed network in
six orbital planes, positioned at a height of 781 kilometers (485 miles) with one satellite every 32 degrees of latitude, with each satellite completing one orbit every 100 minutes, traveling at a rate of 16,832 miles per hour. Each plane has 11 mission satellites performing as nodes in the telephony network. The spare satellites are on orbit ready to replace any unserviceable satellite. Iridium has gateways in Arizona, Alaska and
additional telemetry, tracking and control facilities in Canada and Norway. It is the largest commercial satellite constellation in the world.

This constellation ensures that every region on the globe is covered by at least one satellite at all times. Each satellite is cross-linked to four other satellites; two satellites in the same orbital plane and two in an adjacent plane. The satellite constellation is expected to provide continuous global coverage until 2018 without any additional launches of satellites.